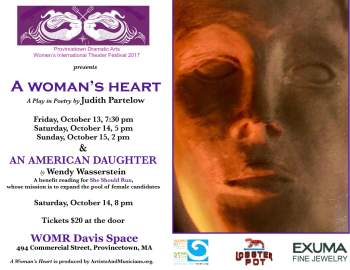 In mid-October, following two highly successful runs—a premiere at the Jacob Sears Library Theater in May 2017 and a second production at the Cape Cod Museum of Art in August—Judith Partelow and her talented troupe of actors were off to the Women's International Theater Festival in Provincetown. Audience raves continue to flow in about this remarkable play: Comments about A Woman's Heart.

Presented by Margaret Van Sant, Producing Artistic Director of Provincetown Dramatic Arts, the festival was held for the 12th year in conjunction with Women's Week Provincetown. The 2017 Women’s International Theater Festival was made possible through the generosity of long-time members of the Provincetown community, including WOMR, Exuma Fine Jewelry, and the Lobster Pot restaurant.

Partelow's enchanting play, A Woman’s Heart, explores a woman’s emotional life as she faces the challenges of child-rearing, career, love, and loss. Three female actors represent the story’s heroine at different stages of her journey, and a single male actor assumes multiple roles. The actors are Cynthia Harrington, Lee Roscoe, and Rod Owens, as well as the play’s writer-director Partelow. The play is produced by Janet Murphy Robertson of ArtistsAndMusicians.org. Judith Partelow and Rod Owens discuss the play on Arts Week with Candace Hammond: Interview at WOMR

Partelow based the play on her book of poetry of the same name. Her powerful language has been called, “funny, sexy, gutsy and vulnerable," "truly magnificent," and more.

As Sue Mellen notes in her review in The Cape Cod Times, "throughout the ages, writers, philosophers and psychologists have mused on what makes women tick. In the end, poetry—at once simple but profound—may be the best reflection of a woman’s heart. Review of A Woman's Heart

Used as dialogue, Partelow’s guileless poetry creates a distinct mood in each individual scene—at times self-doubting or disquieted, at times romantic or serene. Yet there is also a richly detailed narrative thread—beginning in the 1950s and ‘60s and running through to the present day, with life events and cultural references that will likely resonate with any baby boomer.

In addition to writing and directing, Partelow is also an actor. You can see her as Diane Delroy in OFFSEASON-- a 14 part series – on Amazon Prime. She has five fiction pieces in the latest Chatham Writers @ 02633-2016 anthology (from Lulu.com). For more about Judith Partelow, please visit her website.

Here are several rehearsal photos and readers' comments concerning Judith Partelow's poetry. These may help to convey the excitement that Partelow's new work has already inspired.