The regional premiere of Lee Roscoe's Impossible?—a serious satire about the rise of an autocratic regime in America—will be presented by Eventide Theatre Company of Dennis, MA in September 2020. Roscoe's compelling and timely work is supported by grants from the Massachusetts Cultural Council. More about Impossible?.
Roscoe's plays are receiving more and more recognition. The Mooncusser's Tale was selected for a Silver Award from the National Audio Theater Festival. The commercial radio-ready version of this play (58 minutes in length) will also be rebroadcast as part of the HearNow Audio Festival 2020. And The Water Spirits' Colloquy recently won an award from the Blue Water Institute. 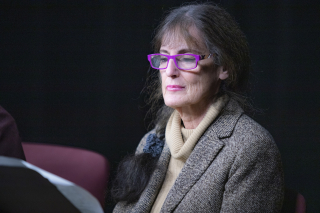 Roscoe's HERE! was read on the main stage of Cotuit Center for the Arts on January 9, 2019 and presented again in a staged reading at the Cape Cod Museum of Art on May 2, 2019. Both performances garnered enthusiastic reviews.

"It stunned me. It was like an Our Town for today." John Bangert, No Place For Hate

"I thoroughly enjoyed it! The reading was excellent. It moved along at a great pace ! Your dialogue and scenes were terrific. I enjoyed everyone,  I definitely can see this as a produced play. Fingers crossed! Scary, funny and poignant. Congratulations!" Judith Partelow, playwright, actress

"We feel so privileged to have heard The Mooncusser's Tale tonight on WOMR. Exciting, lyrical, spooky, tragic, profound -- and so Cape Cod. The characters were real and well-drawn, the writing beautiful, the actors excellent.  Also the pacing and sound effects perfect." June Hager, organizer of Wellfleet Open University, Michael Hager, international lawyer

"Great job! The characters and language were so authentic.The history fascinating. It took me back to another time." Jeff Bumby, retired Wisconsin CEO

"Last night was so enjoyable, gathering by the radio listening to listen to your play.  A great way to spend a Halloween evening.  I thought it was very poetic and really captured so much of historical Cape Cod.  Everyone sounded real and authentic." Bill Salem, actor. NYC and Provincetown

"A play which keeps me wanting to know what happens next, characters which interest me, and a story which is new!" Ed Maroney, newspaper editor retired

“I hadn’t listened to a play on the radio in my life. However,I had listened to baseball games on the radio and enjoyed it so much that I continued that practice from time to time long after tv was in virtually every home in America. My hope was that your play would stimulate my imagination and invoke memories the way the ballgames had. It did that, but to a much grander degree than a simple ball game could. I could see the pictures you were painting of people and community and nature as vividly as I would have walking the pathways of the Cape in those long ago times. In fact, many of the long ago pictures are still very much with us on the Cape to this day. Sitting in our place in Florida where the temperature reached the mid 80s today, it was so nice to be transported back to the Cape in such a wonderful way."  Tim Barnicle, retired Government Executive, Florida

More about The Mooncusser's Tale

The End of America in the Time of the Fireflies

"The End of America is an important play about Americans tormented by a country which has lost its way. Lee’s work is honest, edgy, savage, funny and compassionate.  She writes for actors; her plays are like a rich meal for a director because her characters live with us both as archetypes and as unique beings, multi-layered and broad in scope; at once real and larger than life, enveloped in wonderful language and original stagecraft. As a director, it would be a delight to explore them, to see them develop into living beings on stage. I have worked with Lee for a number of years on various projects. She is always a consummate theater professional and working with her is always an enriching experience for me as a director, actor and playwright. This is a unique and necessary voice waiting for discovery."

“I think her play The End of America is a masterpiece.  It says it all. Getting it produced is the challenge! A powerful and excellent play. It has to hit the theaters!”

Howard Zinn: “I must tell you that I found your play POOR truly impressive. It gets inside the head of a guy who in his one mind and body carries the sickness of our society --and who expresses this in devastatingly real language, nothing artificial about it, as if those words are wrenched from the soul and hurled at us with no shield in the way.”

The late Judith Malina: "This play is brilliant.”

Sean Bennett, playwright, Edward Albee Fellow: “This play reveals the pain of the human condition in failed love: like watching a flower having its petals picked off, one by one.”

The Men or Stalking Random Pastels

Tom Wolfson, author, actor, painter: "I really like the impressionistic quality of the piece, the dance quality you spoke of.  For me the piece resonates as a depiction of the struggle the artist and many people have to be free, to allow themselves to feel and be passionate, to be the way they really are inside without internally and externally imposed restrictions and oppressions.  It is a courageous and ambitious piece.”

The Shame of Daniel Shays

Deborah Ullman Co-Director and Senior Editor Gestalt Press: "The Shay’s rebellion play is outstanding! I so enjoyed it and am amazed you've not gotten it into production more. I learned much from it and am wowed at how you turned historic docs into moving storyline.”

The Second Coming or the God Annals

Michael Kahn said of The Second Coming "Dazzling in its display of linguistic wit; marvelous theatrical sense; rich, evocative, consistently inventive…so well done and thank you! What great theatrical possibilities for a talented director and a daring troupe of actors.”

Avayar Kamari, Living Theatre actress: "It's a magnificent opus, enormously creative, and based on extraordinarily comprehensive scholarship. I see it as a mega-mystery play. It unveils the deep societal dysfunction we've been manifesting overtly since WWII. Art must reflect its time. You have done that, absolutely. I think it is too much for most playwrights, producers and actors to handle, so the usual response is deflecting the pain by retreating into triviality. I had thought to specialize in comedy, feeling that we really need to laugh now. But that's only a band-aid. We need to get the message out. There's little, if any, time. And it will be resisted. Thank you so much for creating this."

Julie Foh, Studio 42: "The passion you have as a writer and for the complex, provocative issues you tackle in this text comes through with bell-like clarity.While I would ultimately like to stretch the bounds of what our audiences can expect from us, I fear this project may be too far too soon.”

Another theater-goer who saw an act at Playwrights Platform, Boston said it was the best thing they had seen there.

Steve Capra, former artistic director Living Theatre, NYC:  “I’d like to recommend the playwright Lee Roscoe. I’m familiar with her work and I find it extraordinary. I was very pleased to produce a reading of Poor for The Living Theatre, and I hope I’ll be able to work with one of her plays again. Her scripts are animated and carefully crafted, and, most importantly, they reflect social responsibility. I am sure anyone who takes the time to read her plays will be greatly impressed.”

Synopses of Lee Roscoe's Plays (in addition to HERE!)